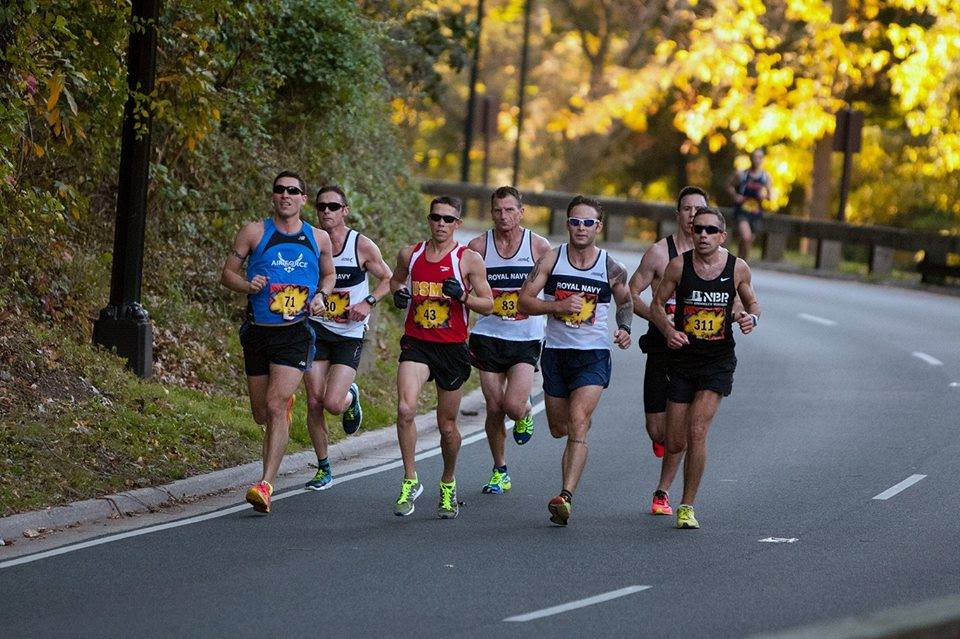 Adam Stokes on his way to an incredible 2 hours 41 minutes and 24 seconds marathon time.

Canterbury Harrier Adam Stokes was one of 8 athletes selected to represent the Royal Navy and Royal Marines in Washington DC’s Marine Corps Marathon on 26th October.

Every year the Navy runners are pitted against their counterparts from the United States Marine Corps to compete for the Challenge Cup- the mean time of the fastest 3 finishers from each side being used to determine the winners.

Royal Marine Stokes was third Navy man home in a personal best time of 2 hours 41 minutes and 24 seconds, just 6 seconds behind team mate Alex Lockett RN. The trio were completed by Finlay Walls further up the road in 2hrs36 to ensure that the Senior Service won back the trophy they had lost last year to the USMC by over 15 minutes.

The Washington course started and finished at the Arlington Cemetery and took runners on a tour of famous DC sights such as, the Lincoln Memorial, Washington Monument and US Capitol Building. On the day athletes faced not only 26.2 gruelling miles but also ever rising temperatures and a strong headwind coming into the final miles.

Speaking after the race Stokes said: ‘Conditions got pretty tough out there, especially in the last two miles. Running past the Pentagon the wind was so strong I thought I’d come to a standstill.’

The result is the third time this year that the Canterbury Harrier has broken the 2hr45 mark after the London Marathon and his Victory in May’s Kent Road Runner Marathon.

‘I’ve been struggling with a couple of injuries through the summer and I certainly wasn’t expecting a PB so I’m absolutely thrilled. Winning back the Challenge Cup is a particularly special and fitting way to help celebrate the Royal Marine’s 350th birthday too.’