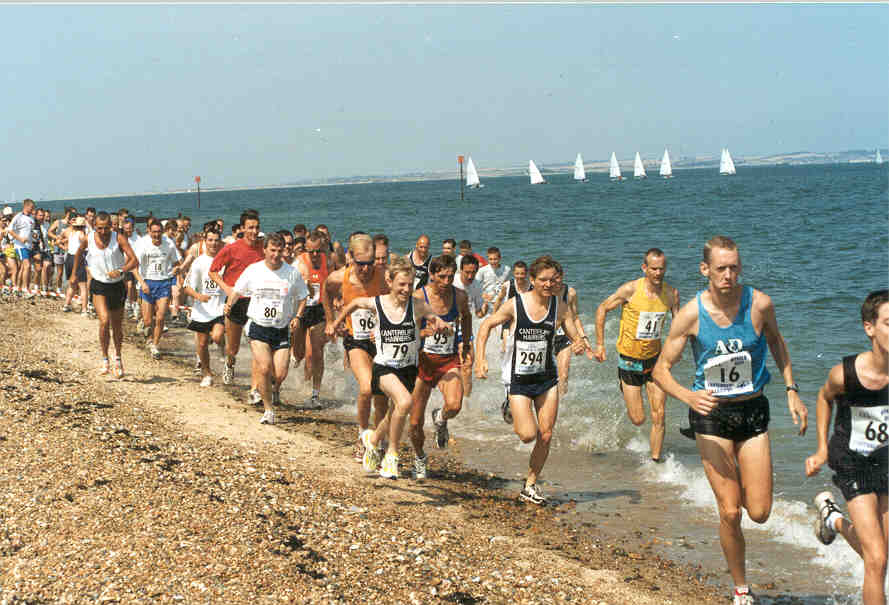 Canterbury Harriers organised the Whitstable Oyster Run on 25th July. This was run as part of the Oyster Festival, and was a beach/promenade run of approximately 4.5 miles which included various obstacles, fiendishly set up by Steve Clark, Bob Davison, Doug Hinsley and Dennis Hayes! Last year the race was called the Mud, Sweat and Tears Run but since this year there was high tide there wasn’t any mud. However, this didn’t stop the organisers from forcing the competitors out into the sea both at the start of the race and at the end!

Daniel Green of Ashford and District (number 16, front-right in the picture, which can be clicked upon to get a larger image) romped away with the main race, finishing in 24:42, just over a minute ahead of Canterbury Harriers’ Simon Kendall. Clubmates Jonathan Holmans and Roy Palmer (no 294, centre-right in the picture) also had great races in finishing 3rd and 6th, respectively. Jack Parnell (27:34; no 79, centre in the picture) and James Branwood (29:43) took the first two U17 spots to complete a good showing for the club in its own race. Sue James of Paddock Wood AC was first female home in a time of 30:18 and she was followed by Faye Roberts running for Chesterfield Barn in a time of 31:20 and Anne Lippett (34:40) of North London AC. Thus Fayne Stone and Emma Farrow (who was running her last race for the club before going off to Sri Lanka), who finished together in a time of 35:08, were just outside the prize list. The first (non-running club) team prize was taken by Chesterfield Barn, although its members looked strangely similar to Medway AC athletes. The junior race of 1Km was a lot of fun for the contestants.

The race was another organisational triumph for Roy Gooderson who was here, there and everywhere on the day to make sure that everything was ready in time. He had to cope with, among other things, a dog show setting up shop along the route of the course! The fact that the day went well was due as well to the many Harriers and friends who helped out with the arrangements on the day. A big thank you is also due to the Waterfront Club, whose building at Beach Walk, Whitstable served as the race HQ.