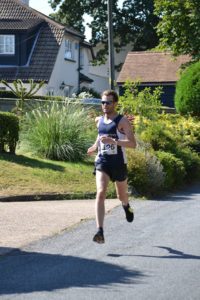 On a blistering hot August Bank Holiday the Harriers were out in force again for  their home half marathon.  The Canterbury Half  is regarded as one of the country’s toughest  taking in the rolling countryside round Chartham  with some challenging hills along the route.  Tom Millard led the way for the full 13.1 miles and came through in first place in a very impressive time of 1.16.21. This smashed club mate Peter Hogben`s previous record on the course of 1.16.48 which he ran in extremely wet conditions when taking first place in the race in 2015. Tom was followed home  by fellow Harrier  Simon Jones in second place in an equally impressive time of 1.18.02.

The Harriers also took the men’s team prize with Jacob Hussey coming third for the Harriers in 1.31.00. This is the fourth year in a row that the club have taken the team prize, an excellent record in our home half marathon.

There were plenty of other debuts from Adam Elston, Dean Bradshaw and Mark Duffy all coming in under 1.44, and despite the demanding course and conditions   Paul Elderton registered a very creditable PB of  1.40.15.

Well done to all those who took part, full results can be found in the results section of the  Harriers website.